Few Christians have heard of the Noahide Laws or know that they were signed into US law on March 20, 1991 by George H W Bush.

Noahide Laws are from the Babylonian Talmud

The Noahide Laws are from the Babylonian Talmud and according to the 1906 Jewish Encyclopedia,

"They declared that the following six commandments were enjoined upon Adam: (1) not to worship idols; (2) not to blaspheme the name of God; (3) to establish courts of justice; (4) not to kill; (5) not to commit adultery; and (6) not to rob...A seventh commandment was added after the Flood-not to eat flesh that had been cut from a living animal."

These Noahide Laws are universal and binding upon Gentiles only. According to the 1906 Jewish Encyclopedia,

"The Talmud frequently speaks of 'the seven laws of the sons of Noah,' which were regarded as obligatory upon all mankind, in contradistinction to those that were binding upon Israelites only. (Tosef., 'Ab. Zarah, ix. 4; Sanh. 56a).

Note: The original Jewish Encyclopedia link has been removed since the publication of this website.

The Penalty for Transgression of any Noahide Law is Decapitation

Christians will all be Decapitated 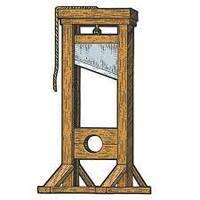 "With but a few exceptions, the punishment meted out to a Noachid for the transgression of any of the seven laws is decapitation." (1906 Encyclopedia)

What few Christians know and what isn't explicitly stated within the US legislation, is that the first and second Noahide laws, which prohibit idolatry and blasphemy, would be transgressed by all Christians. This is because the worship of Jesus Christ is considered idolatry and the name of Jesus is blasphemy according to the Talmud.

"With regard to idolatry, he can be found guilty only if he worshiped an idol in the regular form in which that particular deity is usually worshiped; while in the case of blasphemy he may be found guilty, even when he has blasphemed with one of the attributes of God's name-an action which, if committed by an Israelite, would not be regarded as criminal (ib. 56b; see Blasphemy)." (1906 Encyclopedia)

Therefore, under the Noahide Laws all Christians will be beheaded.

"And I saw thrones, and they sat upon them, and judgment was given unto them: and I saw the souls of them that were beheaded for the witness of Jesus, and for the word of God, and which had not worshipped the beast, neither his image, neither had received his mark upon their foreheads, or in their hands; and they lived and reigned with Christ a thousand years." (Rev 20:4)

Courts will be established everywhere to issue warnings and to exact justice for violations of the Noahide Laws. Some of these courts and even prisons will exist within churches. Few Christians are aware of the inordinate number of church elders today who have police/military backgrounds with some churches even having their own police force. (L)

"The Noachidæ [those who the Noahide Laws are binding upon] are required to establish courts of justice in every city and province; and these courts are to judge the people with regard to the six laws and to warn them against the transgression of any of them." (1906 Jewish Encyclopedia)

The Mark of the Beast